If you not change browser settings, you agree to it.

Today the lighter is so commonly used that most everybody in the world knows what one is. Though we take lighters for granted, if you think about it, they are an amazing invention. In any place, at any time--with only the press of a button--combustion is possible! We think the history of lighters is an interesting subject, so here you have it: 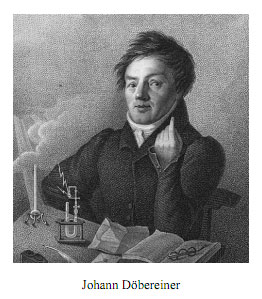 Mechanical lighters appeared in the early 16th century. They worked with gunpowder, and ignition ran like with firearms. They were very noisy, they produced a lot of smoke and sometimes they were dangerous to life. It appears from this that only rich people, nobles, could afford them. They were originally made in Germany and from the 17th century even in England. As a basis for their production, the old discarded pistols served, the fabric that ignited then was charred fabric. In the 18th century, the Japanese made tiny pistols in which silk remains were used for incendiary purposes.
Real lighters, however, began to be produced much later.

The first such pioneer was a lighter invented in 1816.The first lighter was called "Dobereiner's Lamp" (named after its creator, a German chemist named Johann Wolfgang Dobereiner). But his lighter did not use butane or oil as fuel, it used the highly explosive hydrogen. The lighter container was filled with a sulfuric acid solution in which the zinc bar was immersed. The resulting reaction released hydrogen, which immediately flared.
This makes it clear that even this lighter was not safe and today's standards would be damaging. Yet, over the five years, twenty thousand of these lighters were sold, but in production until 1880.
Another difference was that these lighters used platinum as the catalyst (used to start the chemical change of fuel to fire) instead of  flint, or a piezoelectric spark. When using a very valuable platinum you can imagine what a luxury affair was at that time.
Only highly affluent smokers could afford the first lighters, which is why most smokers used matches for a very long time. 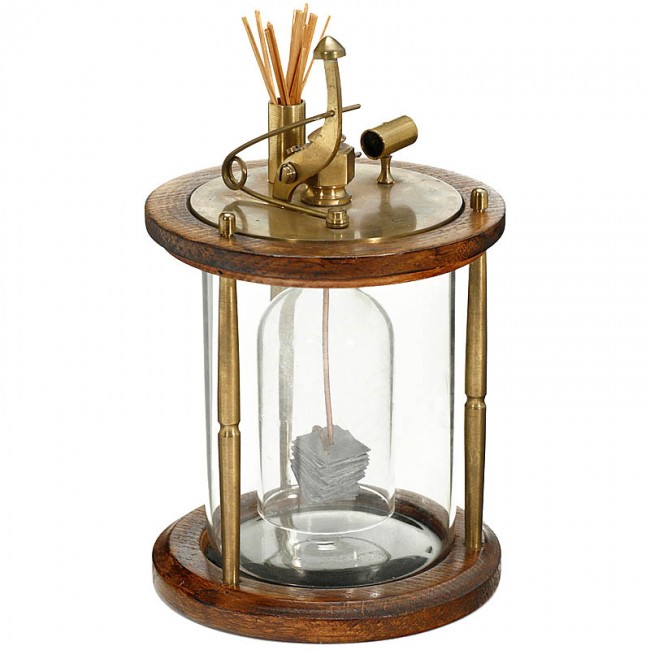 Although it was an amazing invention, Dobereiner's Lamp was not so convenient because it wasn't built for hands to hold. It was a kind of table lighter, like the piece shown in the image on the right. It was considered to be a symbol of social status and prominent smoking.
Common smokers mostly used matches until the flint lighter became more popular. In 1904, the Austrian chemist and inventor of the incandescent mantle Carl Auer von Welsbach invented an artificial sparkler and in 1908 the flint lighter was greatly improved; the petrol lighter was now enough small thereon to fit in the pocket. It was equipped with a sparkling stone and a steel scroll wheel.
Unique flints made specifically for lighters (ferrocerium) went into mass production at this time. Obviously, flint is a fraction of the cost of platinum. The use of platinum as a catalyst thus ended and flint took its place. The lighter has become more accessible, which has stimulated its rapid expansion.

The development of lighters accelerated during World War I. Matches were used by soldiers to find their way in the dark. But the intense initial flare of matches gave away their position too easily, and many lives were lost because of this. Hence, the need for combustion without a great initial flare was born. The raw material for the production of trench lighters could be anything in the hands of resourceful soldiers at the frontline. E.g. a brass cartridge that was padded with cotton and closed with a fitting cap. At the igniter place was a screw thread that served to fill gasoline or kerosene. A feroceric stone flint was flown to the cartridge, which was sometimes supplied to soldiers separately as a pre-prepared piece (see figure on the left).
Inventors started improving the design of lighters and in 1918 when the war ended, they were able to be produced somewhat easier.
In the 1920s, right in the middle of the Art-Deco period, smoking became extremely popular, and lighters were right there to keep up with the trend. The flint wheel lighters were the first lighters that left their mark.
A typical 1920s lighter looked like the image on the left and was probably carried in the wallet of a very chic woman! 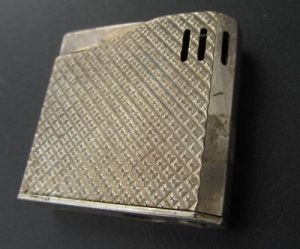 In 1928, a well-known Ronson company was established and began to produce lighters. Its lighters later did not use the flint and wheel, but had an electric ignition. Ronson Electronic had a tiny battery, a capacitor and a transformer. It was enough to press the button gently and a spark has developed that ignited the gas. But we are already in 1947, when the main refill of the lighter has become liquefied propane-butane; at that time some manufacturers have already come to market with solar lighters. It was a Solartronic gas lighter; it was possible to ignite a fire up to 1500 times on a single battery charge.

The fuel used in most of the lighters in the 1930s was oil, an oily liquid that comes from petroleum. The typical logistics of a lighter from this time was as follows: The fuel reservoir at the bottom of the lighter contained a wick immersed in the fuel. The wick led up to the top where a steel-flint ignition system could spark against the fuel-soaked wick and create a constant flame. The spark was made by moving a finger on a rotating flint wheel, that created friction against a small piece of steel.
During the thirties and forties of the 20th century, a ground-breaking innovation of the lighter emerged and so the lighters have been developed that instead of naphtha used as fuel gas - butane. Butane had three major advantages against naphtha: 1) compressed butane allowed to control the flame intensity; 2) it was no longer necessary to replace the wick; 3) the butane odor was not as pungent as naphtha.
It's hard to say exactly who conceived of the idea, but Ronson starting mass-production of lighters that used butane as a fuel, instead of naphtha.

When butane lighters first came into the market, flint was still used as the ignition system. Because lighter flints inevitably need to be replaced due to wear by friction, it was bothersome to a smoker to have to replace it every once in a while. Lighter manufacturers sought after a more advanced ignition system, to make lighters further appealing...
And so the piezo-ignition occurred. The piezoelectric phenomenon was discovered by physicists Pierre and Paul Curie already in 1880.
But the full potential of it was only first realized in 1917, by French scientists. They created a device that ultrasonically detected submarines, which used piezoelectricity to convert one type of energy to another.
The lighter used the same piezoelectric effect as this device used to create an ignition that converts the energy (from the flint crystal force) to the electric spark.
Simply, the principle of piezoelectric ignition is that, under pressure or thrust on some types of crystals like flint or turmalines, electric charges accumulate on them. The induced voltage is used, for example, not only for the construction of gas lighters, but also for miniature sources for signaling devices, for ignition of kitchen gas appliances, etc.
By compressing the crystal, therefore the electrical voltage is generated that creates a small electrical discharge in the spark gap and the spark of the discharge then ignites the gas escaping through the nozzle from the lighter container.

At the beginning of the 1930s, the history of one of the most famous and luxurious ZIPPO lighters was also written. In 1932, George G. Blaisdell decided to design a new look for a sophisticated lighter, the so-called "austrian". He made a rectangular box to which a lid was attached using the hinge. The special shape of the chimney has been preserved protecting the flame in unfavorable conditions. The result of these adjustments was a good-looking lighter, which was smaller than the "austrian" and was also very well controlled by only one hand, which was especially appreciated by the driver. In addition, his metal body could be hardly dent or deformed, as was the case with his Austrian inspiration. Zippo lighters began to be produced in bulk in early 1933 and were guaranteed a lifetime guarantee backed by the slogan "Zippo works or is free to repair". In 2012, Zippo celebrated its 80th anniversary and on the 5th June of that year the 500,000th Zippo lighter was produced. Lighters made on that day were then marked with a special embossing.
In 1941, another world-famous brand of S.T.Dupont´s lighters entered the market. The body of the lighter was made of brass, which is highly shock-resistant. Lighters consist of 70 parts and about 600 manual operations are required to produce them. The lighter passes through more than 300 quality checks. Thanks to manual work, the production of one lighter can take 4 to 5 months. The result is a lighter that is synonymous with elegance, quality and reliability.
Since the late 1950s, when the piezoelectric spark was introduced, lighters have been used by almost all smokers. Now, there are more lighter manufacturers than ever. There are also many different flame types. Aside from a natural flame, there are now lighters that produce torch and jet flames and even multi-flames.
Smokers today may choose a different flame type as a matter of preference or because of what they're smoking (pipes or cigars). Cigar smokers usually use torch lighters and pipe smokers would probably prefer a natural flame lighter. The body of the cigarette lighter has also changed, from metal to plastic production, the unique Clipper Classic cigarette lighter, which has been manufactured since 1959 and whose body is made of nylon that is highly resistant to impact and high temperatures. It is therefore safer than conventional plastic lighters.
However, development has not stopped and a new lighter, a plasma, that comes to the market, does not go out in the wind and does not need any refills. It is charging via an USB cable. And how does it work? Everything takes care of by an electric current discharge directed into two intersecting rays. They create a high-temperature plasma that scopes with cigarettes and other materials such as candle, string, cigar, and all that can be ignited with a classic lighter or matches.
If you want to learn more about the lighters, you can also visit the first permanent exposition of lighters in the Czech Republic in the town museum in Přibyslav, which was created in cooperation with the collector Mr. M. J. Šnek. The exhibition contains mainly lighters from the turn of the 19th and 20th centuries, but also from the recent times, for example from the Sochi Olympics Games, and counts about 7000 pieces.
And do you know what, for instance, does the press do with such a lighter? Watch the video https://m.loupak.fun/video/veda-a-pokusy/34155-hydraulicky-lis-vs-zapalovace
At any rate, the lighter has left a marvelous evolutional trace, and we're happy to be a part of it. Enjoy it with us!